Define your goals
The basic definition of "mission" and "vision" of the company is critical when we've past the stage of experimenting with the startup's model and helps you prioritise better. From the Expedia page it looks like this: "Our Mission is to Revolutionise Travel Through the Power of Technology", in this case, it is also helping the company know that leveraging and scaling with "technology" is imperative for the company (along with operations).

Set 2-3 basic targets for the next 2-3 months (possibly 6 months)
These might be pretty standard and should align with the mission / vision of the company. If your company wants to be the #1 company in Asia for travel, these basic targets might be:

Goals help define epics and create a huge backlog
Now brainstorming how the targets above can be achieved, we create a good backlog of tests we could run that essentially are experiments which help you scale. If I look at point #1, to increase the number of app downloads you could:
Prioritise
​With the limited bandwidth, we should prioritise based on a couple of factors:
Create experiments / pre-MVPs
Keeping the creativity scientific is quite essential for any company. If we can potentially put up unscalable hacks to test the market (say 1% of the users) - then we should. In this example, if we can leverage phonegap to basically increase our platform reach as an experiment (maybe for legacy platforms like symbian or blackberry) and that can happen in a few days - then we should, before investing our technology resources toward building a full fledged app for any platform.

Planning to buy a Volkswagen car in India? Read this before you make a decision

My car has been repaired properly now and is in a good condition. I'm removing this blog on repeated requests from Volkswagen India.
at October 31, 2013 530 comments:

Read it on yourstory


The concept of “Product Management” in Software Product Company involves a high volume of interaction with the technical teams. When I say that, the first thing that comes to our minds is “Duh! That’s common sense!”, but quite often we don’t do the “interaction” part in the right way.
Product Managers are the CEOs of their own products, they are responsible for the technology, operations, sales, and accounts – basically the success of their products. Hence building the correct product and getting the development effort in the right direction is imperative, and by doing that, we ensure our contribution towards creating a strong and inspiring technical team in the long run. Some key attributes which makes your role as a “Product Manager” a big hit with the technical folks can be -
When interacting with the developers, think like them! – understand the problems in their perspective and contribute to alternative suggestions in solving the problems as well. If you’ve been interested in reading this article – get rid of the cliché thinking that Product Managers are not coders, they might not code on production environments but there’s no harm in getting your hands dirty to know what your company does better. Believe it or not, I’ve seen product managers with impressive profiles wasting precious development time on conducting unnecessary meetings, struggling to understand the impact of architectural changes because they are technically unaware. The more you know, the more confidence your technical teams have on you. Quoting Naval Ravikant (from one of his talks) – (Founder of several startups including Angelist, Venturehacks and one of the early investors in Twitter, Foursquare, StackOverflow to name a few) –
“Programming in the current generation is the skill of the elite – like reading and writing was in the past”
at April 12, 2013 122 comments:

I had to formulate an algorithm to convert an image of some resolution - say L x M and
crop / re-size the image into a new resolution say P x R such that I cover the maximum amount
of points/pixels from the original image.

APPLICATION:
This can be pretty much applied in a generic way to all programs and websites in need of an optimized algorithm to rescale / reduce the size of the original image in their application such as profile images in social networks etc.

The signature of the function before we started writing the algorithm:

Moving to a new aspect ratio was basic maths, so I formulated the equation which would
give me a new resolution with the same aspect ratio viz:

Now we have 2 variables X and Y that we need to minimize so that the highest amount
of pixels are captured from the original image.

The first thing I thought of to minimize these variables was to use differentiation,
but since equation is linear and it did not make sense to put dY/dX = 0 and get the maxima or minima.

One thing I observed here was the values of X of Y should be positive since we
cannot exceed the number of pixels of the original resolution.Hence if we plot a
graph or Y to X, the values we'd minimize would lie in the first quadrant (bulb lights up!):

Rearranging equation (i) to form the equation of a straight line:

analoguous to the equation of the straight line

The Y intercept i.e. c is therefore the deciding factor on whether X should be zeroed
or Y so that both X and Y are positive.

So, once we have positive mimimum values of X and Y, we can crop the image to
the resolution (old_x - X) * (old_y -Y) which is of the exact/similar aspect ratio
of new_x/new_y.
The next step that follows is re-sizing the image to the resolution new_x * new_y.

This algorithm works for all scenarios viz old_x > new_x or old_x <= new_x or old_y > new_y
or old_y <= new_y. Using this algorithm reduces the number of comparisons to just one variable
that is the Y intercept c and also makes the computations easy.


The code would be published in an EDIT, request for the code via email or in comments.

Google plus has joined facebook and twitter in supporting REST based sharing on profiles, I am still hunting for the documentation of this, but the url "https://plus.google.com/share?url=www.sukh.us"
seems to work for every web address now.

This had been limited to some web addresses like stackoverflow.com, google.com before but now they're pretty much available for use on your website.

One major problem to address while indexing is the generation of correct tokens. Finding the root word of each tuple is quite important as it reduces the index size drastically, say equal, equals and equally can be just stored in one root word equal. Here Stemmers and Lemmatizers come into picture.

Stemming strips down a word into a root word using standard english patterns and does it's job pretty efficiently most of the times. It is fast and involves less computation and is widely used in search algorithms.

Lemmatizers are used where a more precise result is required while finding out the root words, where the  number of keys and data size is a constraint and we need more realistic keys. Lemmatizers are a common concept or branch of Natural Language Processing which intelligently find out the root words of the tokens using heuristics and stored language dictionaries. There are various dictionaries being built for various languages which are pretty efficient.

One of the good implementations I experienced which is still at a nacent stage in building it's English dictionary is the Lemmagen. Extremely efficient, pretty good algorithms used and easily portable via platform invokes / c-library. Completely written in native C++ without using any external libraries. I have written a python-usable exposed makefile and other stuff which creates a shared object of this project when complied and exposes its lemmatization functions to the python interpreter. The code for which can be found HERE.

Yet another NodeJS chat prototype

Disclaimer : The code / concept here is pretty novice, good for people just starting with nodejs but needs a  lot of refinement.

Installation : You can download nodejs installer according to your OS from nodejs.org or use your OS repositories for a copy of nodejs supported by your OS. The rest of your packages viz socket.io and express are stored in the nodejs repositories and can installed using the following commands:

MongoDb can be downloaded from the mongodb.org website and you just have to run mongod daemon to ensure the database service is running.

The code for the chat server is available HERE.

Set the mongodb host and port settings on db_ops.js and on the parent folder run: 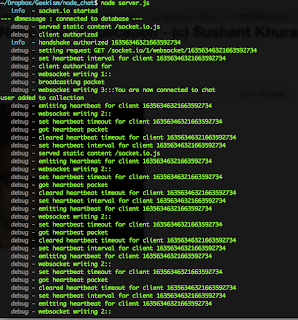 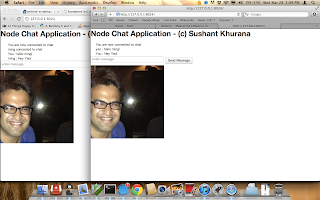 Define your goals  The basic definition of "mission" and "vision" of the company is critical when we've past the...